Chappel Dam in its current form was built in the early 1920s and was used to produce electricity. It was bought by Gladwin County for $1 in 1964 when it became no longer necessary to provide electricity for the town. Today the Dam is operated and controlled by the five member Wiggins Lake Authority, which is unique as the Dam exists to benefit the property owners on Wiggins Lake.  Two of the five members of the Authority are POA members, giving the POA significant influence over how the dam is operated and maintained. This is a great benefit to vacation home owners who are unable to vote in local elections.

The POA has recruited and trained a group of men and women who volunteer to assist in the operation and maintenance of the dam.  Each of those individuals has been vetted by the county and we all have 24/7/365 remote access to the data from the dam, which not only enables us to closely monitor the dam but also enables us to provide reports on any unusual situation at the dam posted on Wiggins Lake Property Owners as soon as the immediate issue has been resolved.  The support group, as well as the county Emergency Manager is alerted by text message whenever the computer system detects any anomaly   in the operation of the dam.

A photo of the home screen as it appears to each of us is posted below.

​Unlike other operating systems our state of the art automated control system is able to maintain the lake level within approximately ½ inch of the court ordered water level, giving property owners unparalleled peace of mind. 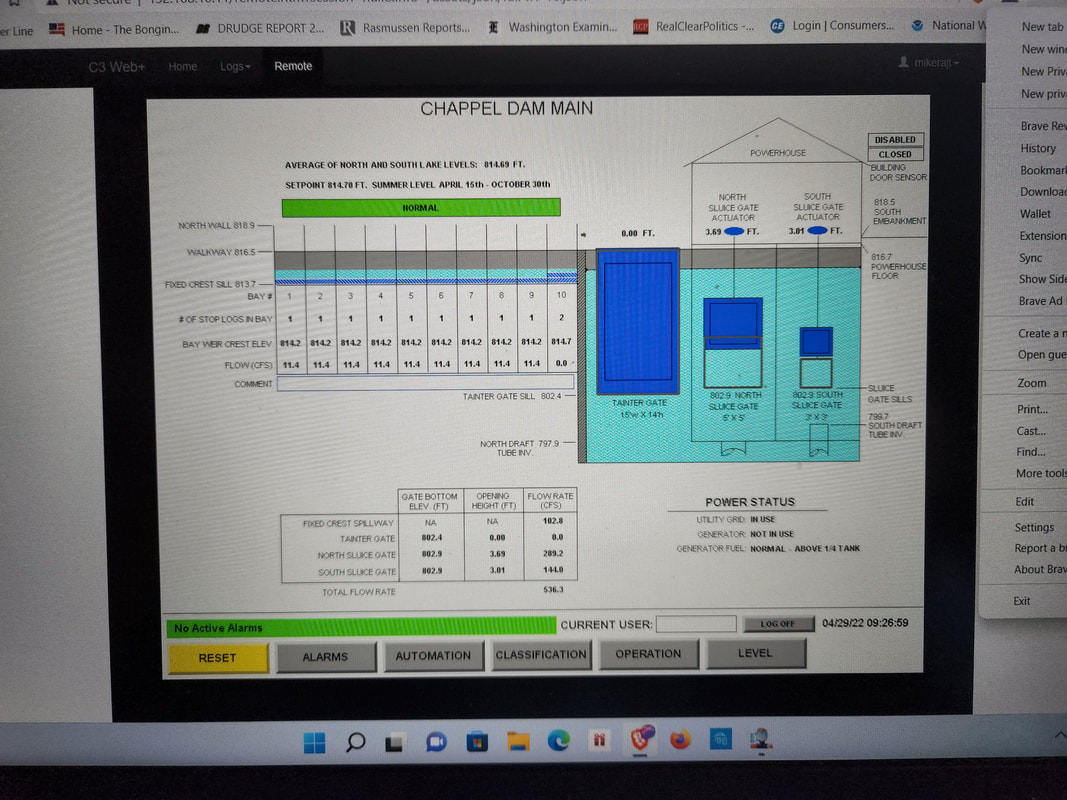 During the high water event of May 2020, when three other dams in the county either failed or were damaged to such an extent that their levels were significantly lowered, our dam survived with only minor damage, thanks in part to the efforts of county Emergency Manager Bob North and Dave Petterish of the county Road Commission who brought in several truck loads of road gravel on an hour's notice.  This gravel was added to the South Embankment of the dam and prevented an overtopping that would have lead to failure.

That lead the lake's property owners to insist the dam be upgraded to fully automate it, significantly increase its capacity to flow water, modernize the computer system and raise the level of the South  Embankment.

Here are some photos of the work done the night before the flooding to save Chappel Dam and our lake.

We could not sign a contract or give the Notice to Proceed until the bonds were sold and the project funded, which could occur no sooner than late September due to timing.  The contractor needed to start repairs as soon as possible, so he asked us if it would be OK if he mobilized by bringing in his equipment beforehand and setting it up based on a handshake.  We agreed and he did so.

Preparation of the lake itself for the dam repairs commenced on Monday, September 28 when we began to lower the water level at the lake by just over 1 foot, to allow the spillway to dry so the contractor could begin work with the needed spillway repairs.  In order to maintain water flow downstream, the sluice gates were opened  and adjusted to maintain sufficient flow downstream and the reduced lake level manually.

At 9:30 AM on September 30, I received notice that that bonds had funded, signed the contract and the Notice to Proceed and emailed them to the contractor.  Before 10 AM, the contractor's crew was at work.

The first item to be repaired was the spillway.  Most of the flat work concrete had deteriorated significantly over the 100 years since it was poured.  The contractor cleaned the spillway and then laid rebar to reinforce the concrete to be poured.  Then cement trucks came in.  At first, the cement was delivered to the spillway by a flexible piping system.  When the concrete reached a point that the piping system could no longer reach, concrete was poured into large buckets which were then moved on the lake bed by tracked equipment to where it was needed.  This work took about a week and when it was done and the concrete had cured sufficiently, we reduced the flow from the sluice gates (but still kept the flow above a minimum amount needed to avoid ecological damage downstream) until the lake reached its normal level.
​Here's a slideshow of the work on the spillway.
Work then continued on other concrete portions of the structure, including raising the south embankment by two feet to conform to modern standards for freeboard, installation of a coffer dam to allow tainter gate repairs and installation of a power hoist to operate the tainter gate.